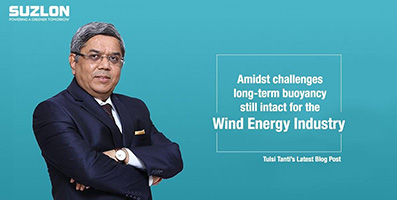 Financial Year 2017-18 (FY18) has been a year full of vicissitudes—decisions, policies, regulations and referendums that have had across-the-board consequences on the way we conduct business. The transition from the Feed-in Tariff (FIT) regime to competitive bidding created a temporary lull in the demand for wind energy; however, there has been a greater resilience shown by Suzlon and the industry at large despite the challenges. The long-term resilience and tailwinds for the sector remain intact; this is particularly reflective in Suzlon commissioning 626 MW installation (highest wind installation for the year) while maintaining its number one position in the market. India is on the cusp of adopting clean energy on a large scale, which has never been the case before. Over the last three years, the installation of renewable energy in India has doubled from 32 GW to 63 GW (as per the MNRE data). With over ~34 GW installation, the wind energy is not just the most successful and reliable but also the most affordable and clean for our nation.

Central and state bidding, retail along with captive segments have positively positioned India to deliver more than 10 GW of energy per year for the next five years. The first auction of 1 GW capacity that took place in February 2017, witnessed 100% power off-take by non-windy states. Moreover, an additional ~2 GW bidding that took place throughout the year at central and state levels also stipulated that all off-takers of energy were the non-windy states. A total of 7.5 GW of wind energy projects have been auctioned till date and another 7 GW is in the pipeline. These initiatives have paved the way to unlock 300 GW wind energy potential in India and therby cater to the demands of non-windy states. Also, the waiver of Inter-State Transmission (ISTS) charges and losses on the transmission of the electricity generated from solar and wind sources of energy by the Power ministry has further opened the market to the rest of India. Incidentally, the waiver of ISTS charges in the central bidding scheme will benefit all 29 states in the country that was earlier limited to only the nine wind-rich states and further allows a huge expansion of the market for renewable energy sources to pan-India.

Additionally, the market's visibility is also improving and the government is heavily committed to pushing resources at the highest priority. Another positive step for the industry is that some of the states are planning to reduce their dependency on coal-based power plants, which are old, inefficient and expensive and are likely to replace them with the renewable capacity in their respective states.

Wind-Solar Hybrid and Offshore offer large-scale opportunities for the sector. MNRE recently unveiled the National Wind-Solar Hybrid Policy and it reiterates the government’s commitment on renewable energy. There is huge potential for Wind-Solar Hybrid given the complementary cycles of generation and better utilization of existing evacuation infrastructure without duplication of costs. With a coastline of over 7,600 km, India offers tremendous potential for offshore wind. Suzlon is keenly persuading offshore and is the first private sector player to install an offshore LiDAR based met station with remote monitoring system in the Arabian Sea, off the coast of Gujarat to collect wind data. These opportunities augment well with Suzlon as we are a vertically integrated organization, with over two decades of operational track record, offering end-to-end solutions and an experience of installing over 17.5 GW of wind energy capacity in 17 countries across Asia, Australia, Europe, Africa and Americas.

Technology and innovation will remain the catalyst that will drive growth in the renewable energy sector. Digitalization of services, innovation in tower and blade technologies aimed towards making unviable wind sites viable, ensuring better yield and increasing turbine utilization will be the key focus areas. Moreover, a conducive environment of policy reforms and growing consciousness to mitigate the climate change risk has ushered the momentum in the favour of renewable energy across the world. It is gratifying to witness the new wave of interest and positive actions in the clean energy sector.

It is projected that by 2035 an additional capacity of 60% will come from the renewable industry (based on the industry forecast for the renewable industry), reinforcing the fact that the sector’s future is extremely robust. Similarly, in India, more than 60% new capacity in the last two years has come from only renewables, and this momentum will continue for the next five to ten years in India too. While FY18 laid the foundation for sustainable and inclusive sector growth, FY19 promises to bring in new excitement for the renewable energy sector. The wind industry is poised to grow at ~10 to 12 GW every year from FY19 through the state and central bidding along with the captive projects. Renewables will play a critical role in India’s energy basket in order to ensure long-term energy security of the country, enabled by rapidly evolving technology, the cost competitiveness of renewables and conducive policy reforms. There is a good visibility of volume for the next five years and at the organizational front, we are fully equipped for that.